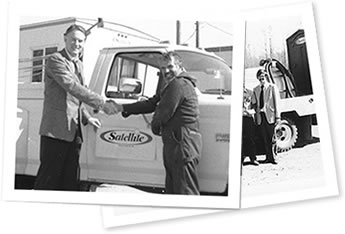 Beginning in 1958 and continuing today is Satellite’s vision for improving sanitation worldwide. Todd Hilde, son of founder Al Hilde and the current owner of Satellite, sees the increased use of portable toilets around the world as an encouraging step towards improved global health. “When my father began his business with 36 wooden toilets in Minneapolis he did it primarily to offer convenience, privacy and dignity. The past fifty years has taught us that it is also critical to protecting public health and the environment.”

Todd’s vision for Satellite was to expand its presence around the world. Prior to purchasing the business from his father in 2004, Todd initiated the opening of offices in Belgium, France, Spain, UK, Hong Kong and Japan. Satellite now provides products to portable toilet operators in over 120 countries around the world.

Satellite has meet the growing demand for its products through acquisitions, investing in new facilities and most importantly, adding more dedicated employees. In 2009, Satellite acquired a long-term supplier/manufacturer of Safe-T-Fresh deodorizers and cleaners and has continued to expand the facility. For toilets, a new 115,000 sq. ft. central distribution center was built in 2014 to increase inventory, assembly and shipping capacity. This facility also became home to Satellite Suites manufacturing, a new venture started by Satellite to meet the demand for toilet, shower and ADA trailers.

Portable sanitation will continue to evolve and spread around the world, and as it does, Satellite’s vision remains the same; to provide toilets that offer convenience, privacy and dignity.

Satellite looked to expand its product lines and increase manufacturing capabilities. This step would require purchasing an existing product line and manufacturer or setting up a whole new facility. After evaluating the options, PolyPortables was chosen because of its strong reputation for a quality product line and its thermoforming facilities. With the merger of the two companies Satellite became Satellite | PolyPortables.

Satellite sought to regain control of manufacturing Safe-T-Fresh deodorizers and cleaners, which it had done prior to 1998. The step would require purchasing an existing manufacturer or setting up a new plant. After evaluating the options, it was decided the best course was to purchase the company that had taken over the manufacturing in 1998. 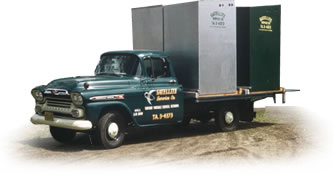 Founded in 1958 by Al Hilde, Jr. Satellite evolved from a simple notion of providing human dignity. During service with the US Army and back home at sporting events & construction sites, Hilde observed that adequate toilet facilities were missing. He firmly believed that portable toilet services would be an essential and decent service for many. Later that year, Al Hilde built the first wooden prototype toilet. Shortly thereafter Hilde designed a service truck equipped with a vacuum pump and waste tank, and then went on to develop a deodorizer formula to ensure pleasing conditions inside the toilets. With a fleet of 36 toilets, a service truck and the deodorizer formula, Al Hilde began selling the new toilet rental and service to construction companies.

Innovation and Development
In 1972, Satellite began producing polyethylene toilets, which were much lighter and more hygienic than wooden toilets. This new equipment was an innovative boost in the market and quickly became sought after. As Satellite began exporting its products, business also grew rapidly in Germany, Japan, and Australia. Soon, Satellite products could be found around the world at major events and commercial applications. Over the next 30 years, Satellite was instrumental in developing the modern day rental and service operation that delivers portable toilets directly to job sites and outdoor events.

1988-1995
Design and Manufacturing
In 1988 Satellite’s rental and service division was sold in order for the company to focus on improving their design & supply of portable toilet equipment, service trucks, deodorizers and cleaning supplies to businesses around the world. Better equipment design and function was a significant driving force. Reducing minutes, even seconds, on service and repair times directly improved the operators’ profitability and success. Satellite redesigned its toilets to be more durable and easier to clean in order to lower the overall cost of ownership and to shorten service times. That same strategy was applied to the design of vacuum tanks on service trucks by making the hoses, pump and deodorizers on trucks more easily accessible and by improving the trucks’ safety and maneuverability.

1995 – 2004
International Expansion and Growth
In 1995, under the new leadership of Todd Hilde, Satellite established its European head office in Brussels, Belgium. Over the next few years, Satellite went on to open offices in Spain, France, Germany, Poland and the UK. An Asian-Pacific office was also opened in Hong Kong, and a joint-venture was established in Japan. Warehouses were set up around the world and regional manufacturing was started in various countries to improve lead times and service.

2011
Technological Pioneer
In 2011, Satellite was selected as one of the top 100 companies to receive the PM100 award, which honors manufacturing companies that have transformed themselves through the use of information technology. Satellite was specifically recognized in the category of Business Model Mastery for their use of technology to connect customers, suppliers, and employees on a global level. An integrated ERP (Enterprise Resource Planning) system continues to be integral to Satellite’s success and global expansion efforts.